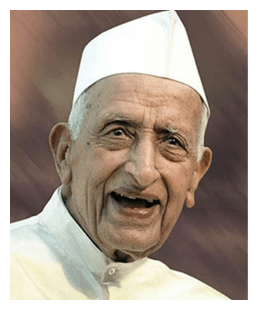 It's no small achievement to distinguish oneself in such diverse fields as commerce, education, and philanthropy. Pujya Shriman Karamshibhai Jethabhai Somaiya, born on May 16 1902 in the remote village of Malunjar in Ahmednagar district of Maharashtra, India, was however, a blessed person by dint of hard work and singular devotion to service.

Born to humble beginnings he rose to become one of the doyens of the industry in Western India. The young Karamshi, after completing school at the New High School in Mumbai (now the Bharda School) went back to his hometown in Ahmednagar embarking on a career of tireless work marked by singular devotion to whatever he did. Karamshi’s young, fresh mind was moulded by Gandhiji's ideas of 'Swadeshi' and 'Satyagraha'.

Young Karamshibhai Somaiya began his career by engaging in his father's small grocery business and then went on to become a partner in a leading sugar trading firm in the area while continuing to nurture his dream of contributing to the creation of a resurgent India – a vision painted by Mahatma Gandhi and Swami Vivekananda.

In the year 1939, Shri K. J. Somaiya launched 2 sugar factories – in Sakarwadi and in Lakshmiwadi to mark the launch of his own sugar business. He soon came to be known as the Sugar King of India.

At the age of 60 he relinquished the leadership of his economic enterprise to his son Dr Shantilal Somaiya, and fully immersed himself in social service. He was committed to the ideal "what you receive from society give back multifold". No sketch of Shri K.J. Somaiya can be complete without mentioning his philanthropy. You can read more about it under the Outreach section of this website.

Shri K.J. Somaiya was warm and endearing. Stately in appearance, immaculately dressed, generally in spotless white hand spun khadi, he exuded a picture of resourcefulness and restraint. He was compassionate and reached out to those in suffering. In all he did, Karamshibhai brought a sense of love and humanism, qualities imbibed in his early youth from the teachings of Mahatma Gandhi. He believed in the ancient Sanskrit saying (na manushit paro dharmah). "There is no religion greater than Man". Karamshibhai's life exemplified this lofty principle through practice.

Shri Karamshibhai Somaiya passed away on May 9, 1999, a week before his 97th birthday. Somaiya Vidyavihar is the living legacy he has left behind, a standing monument to his sagacity, perseverance and foresight. 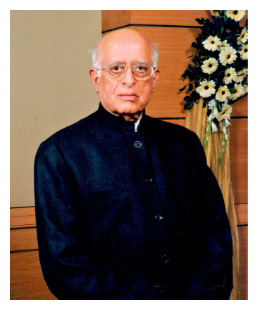 Dr. Somaiya did much in the field of sugarcane research, sugar manufacture and ethanol, and ethanol based chemistry. His contribution to the company was the identification of the site for sugar production in Karnataka, at Sameerwadi, in the late 1960s. At the time, there was very little cane grown there. He founded the K. J. Somaiya Institute of Applied Agriculture Research (KIAAR), and taught the farmers of the area how to grow cane. Today, North Karnataka, is among the best cane growing areas of India.

Dr. Somaiya was awarded a honorary Ph. D. by The University of Agriculture Science at Dharwad, for his outstanding Contribution to the growth of prosperity in the area.

Dr. Somaiya also pioneered the production of ethanol from molasses in the 1950s, in a time when molasses was a waste disposal problem. In the early 1960s, he pioneered the use of ethanol as a feedstock for industrial chemicals. It is only now, in the face of rising energy and petrochemical costs, that the world is revisiting the use of renewable chemistry.

He was also a believer in the power of the sugar industry, to bring about social as well as financial prosperity. He continuously tried to create new social programs to benefit the rural population. His last program, ‘Ankur’, was to try and eradicate blindness caused by the deficiency of Vitamin A in the diet. This he tried to do by establishing a partnership between the National Association for the Blind (NAB), and various sugar mills.

He led the Somaiya Trust and was the Vice President of Somaiya Vidyavihar. He presided over very rapid asset creation at Vidyavihar, and also conceptualized the Sanskritivihar. These institutions would teach courses on Indian philosophy, religion, and bring values into the curriculum. The K. J. Somaiya Bharatiya Sanskriti Peetham, K. J. Somaiya Institute of Buddhist Studies, K. J. Somaiya Jain Centre, are all parts of this organic whole.

Through these institutions, he also brought people of diverse backgrounds together. He organized programs on inter religious dialogue with the Vatican, and was invited by the President of Kazakhstan for discussions on the Islamic religion.

Dr. Somaiya passed away on the 1st of January, in Melbourne Australia, where he had gone to deliver a speech at the Parliament of Religions.

He was a worthy successor to the tradition set by our founder, and also set a new and expanded course, for both, Godavari, and the Somaiya Trust.

He has left behind a wonderful vision of an integrated development, whether in business, education religion, or philosophy. One that engages, rather than divides, and encompasses all, reflecting the true spirit of our heritage and tradition.